An Evening with Kevin Keegan 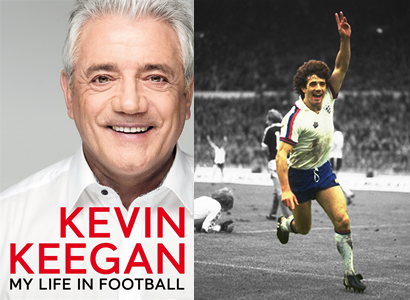 Booka Bookshop are thrilled to present an evening with football legend Kevin Keegan as he tells the story of a remarkable career which saw him rise to become one of the superstars of the sport.

Kevin Keegan is one of the greatest players in English football history. Throughout his career as a player and manager he was famed for his style on the pitch and the passion for the game, which he shared with his fans.

In My Life in Football, Keegan tells the story of his life, from the streets of Doncaster to signing for Liverpool under Bill Shankly where he won three First Division titles, two UEFA Cups, a European Cup and the FA Cup before moving to Hamburg where he won the Bundasliga as well as the Ballon d’Or twice.

After retiring, Keegan enjoyed a legendary five-year spell as manager at Newcastle United during which the club was promoted to the Premier League and then finished runners up in the top flight, not once but twice.

In My Life in Football, Keegan tells the full story of the glorious highs, but also the pain of managing England and his unhappy return to Newcastle for a short-lived second tenure.

Brilliant, funny, passionate, deeply moving and incredibly honest, My Life in Football is the full story of an incredible journey from miner’s son to being crowned ‘King Kev’ by his adoring fans.

Don’t miss this opportunity to see and meet one of football’s true icons!

NB All books will be pre-signed before the event. Given the size of the event, it will not be possible for Kevin to provide personal dedications or sign memorabilia on the night.

Tickets: £25 (includes a signed copy of My Life in Football). Tickets available from the bookshop, or purchase online (with booking fee).