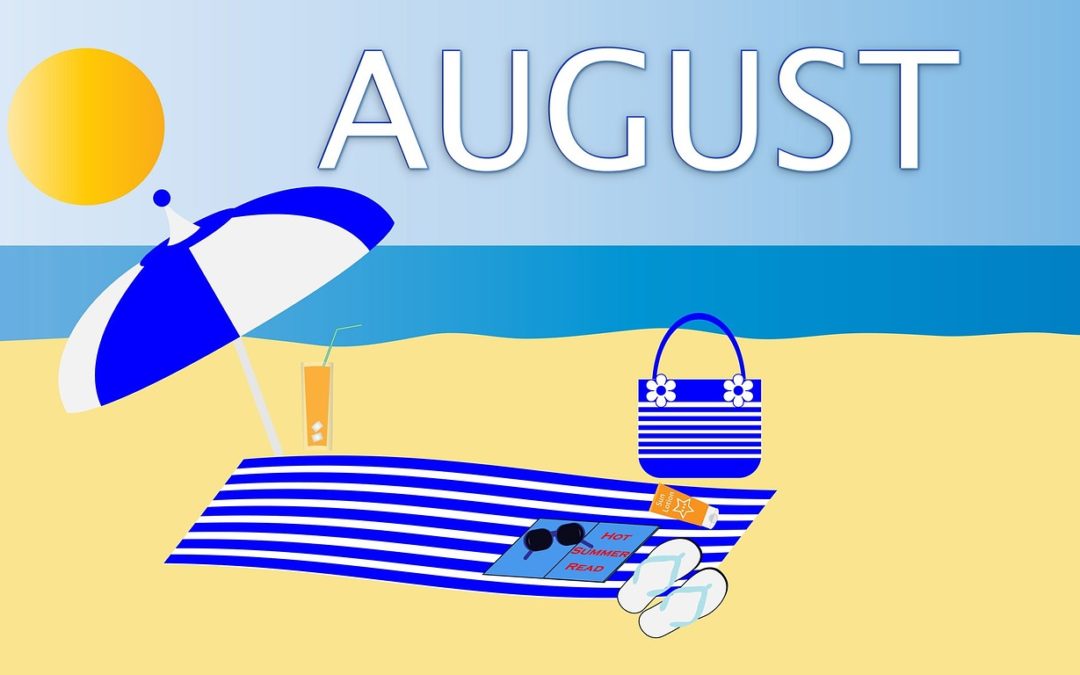 When August is being kind, it gives us warm weather, long evenings and hopefully a few days off. These are the days of reading outside, taking a book to the park and getting stuck into a summer bestseller. In the second of our monthly posts, we round up the new and unusual joys that August offers a booklover.

Philippa Gregory, Tidelands (2019). Gregory is a household name in historical fiction. Since the late 1980s, she has written over thirty novels, including The Other Boleyn Girl (2001), and The White Queen (2009), which have been adapted for the screen. Most famous for her Tudor and Plantagenet series, Gregory has also explored the slave trade in her writing and produced a series of books for children. Tidelands, the first in a new historical series, is set in 1648 at the height of the war between king and parliament. This is a time of superstition and witch-mania where a woman’s act of kindness one dark night will set in motion an unseen train of events with deadly consequences. Tidelands is published on the 20th of August and on the 21st of August we are delighted to be welcoming Phillipa Gregory to Booka. There is more info here if you would like to join us for what is sure to be a fascinating evening.

R.J Palacio, Wonder (2012). Again, we’re being strict here so it can’t be Augusta or Augustus! This is one for the children, as it is the summer holidays. August (Auggie) is the 10-year-old protagonist of this award-winning children’s book which was made into a film in 2017 starring Julia Roberts, Owen Wilson and Jacob Tremblay. August has severe facial deformities and has been home-schooled to protect him from the possible cruelty of strangers. At the age of ten, however, his parents make the difficult decision to send August to school, knowing he will have to face the big world one day. August finds friends, bullies and new challenges at school in this surprisingly funny and uplifting book about being different only on the outside. This might be a good book for young readers before going back to school, promoting as is does, conversations about being kind and brave, especially when other people aren’t.

August in the Title

William Faulkner, Light in August (1932). If you fancy something dark and brooding to mix up your August, this might be just the book. A towering great of American literature, Faulkner (whose name was apparently misspelled on his first novel and he just went with it) was a Pulitzer Prize-winning writer whose most famous works include The Sound and the Fury (1929) and As I lay Dying (1930). Light in August was ahead of its time, published in the south during the Jim Crow segregation laws. It follows the parallel lives of two misfits. Lena is looking for the father of her unborn child who had promised to marry her. Joe is a violent man who though light-skinned, believes he has black ancestry and is trying to find his place in a dangerous society. A masterpiece of the ‘southern gothic’ genre, with decaying plantation houses, lynching, murder and deep-rooted racism, Light in August draws on both the oral story tradition of the deep south and the pervading biblical themes of light and darkness.

Born in August in the 18th/19th Century

Got time for a classic this August, or maybe some poetry? Some of our greatest authors were born in August. See if any of these writers appeal:

Barbara Tuchman, The Guns of August (1962). Despite it being over fifty years since Tuchman’s Pulitzer prize-winning work was published, it remains an unparalleled account of the first days of World War 1 (August 1st – August 4th 1914) You may perhaps remember from school the chain of events (the assassination of Archduke Ferdinand, the mobilisation of Russia and so on) that in a few short weeks plunged Europe in total war. Tuchman gives minute, yet never dull, attention to the first few days in August that were to shape the entire war. Perhaps most fascinating is the focus on misconceptions, miscalculations and mistakes, which ultimately led to the horror of drawn-out trench warfare. Of particular interest is her discussion of the major leaders’ complete belief in the power of morale, their outdated insistence on war etiquette and complete blindness to the political backlash in their respective home nations. This classic book will reveal everything you ever wanted to know about the August days of war.

Timothy C. Wineguard, The Mosquito: A Human History of Our Deadliest Predator (2019). What do the rise of Starbucks, the lives of the popes, the surrender of Scotland, the success of George Washington, the popularity of gin and the politics of the African nations have in common? You may have guessed it – the mosquito. About 108 billion people have lived and died on our planet and about 52 billion of those were killed directly or indirectly by the mosquito. What would our world be like without them? This is a question we might casually throw around on a camping trip when the spray runs out, but here Wineguard asks it with all seriousness. Perhaps most terrifying of all, as our planet heats up, the mosquitos are traveling north, bringing sickness and death with them. Are we ready for them? The day might not be too far off when a trip to Kent becomes as risky as a trip to the tropics. Enjoy summer while you can, real-life horror doesn’t come much scarier than this essential new read, published this August.

We would love you to join us for one of our August events, there are plenty to choose from. As already mentioned, Philippa Gregory is joining us on the 21st of August to talk about Tidelands. The 6th of August will feature two fantastic events. Booka is hosting Konnie Huq at the Lion Quays Hotel for a morning of fun as she introduces Cookie and the Most Annoying Boy in the World, the first book of her new children’s series. You can read our previous blog piece on Konnie’s visit here. On the evening of the 6th of August Susannah Stapleton will discuss her new book on Maud West, a remarkable lady who ran her own detective agency in London during the golden years of detection. Alix Nathan visits us at Booka on the 7th of August to talk about her compelling new thriller The Warlow Experiment. We are adding events all the time so if you don’t want to miss out, subscribe to our newsletter for all the latest news, events, posts and updates.

A warm welcome awaits you in Booka every day. We hope you can join us this August at an event, for a coffee and cake, or to browse for your new books with us very soon.

Image by Karen Arnold from Pixabay