Stories, Choices and Poetry: Clare Mackintosh and ‘After the End’ 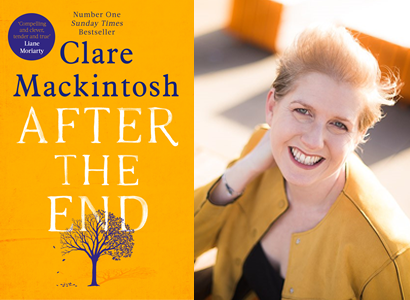 In 1915, while war raged in Europe, two poets were walking in the woods. Their names were Robert Frost and Edward Thomas. When their paths through the trees came to forks, Thomas hesitated, not knowing which way to turn. Any decision made was regretted later, and he never knew whether he had taken the best path. Frost laughed gently at him, and when he returned to America, wrote a poem about Thomas’ struggle to choose. Perhaps with his friend’s poem in mind, two years later Thomas made the decision to enlist in WW1, and was killed in the Battle of Arras in 1917.

A true story? Perhaps. The mystery surrounding Robert Frost’s “The Road Not Taken” is as intriguing as the poem itself. Popular belief has it that Frost did not mean the poem to be taken seriously, but since its publication, many have strongly identified with the narrator’s dilemma. How on earth do you know whether you have made the right choice, until it is too late? This profoundly moral question is central to Clare Mackintosh’s new bestseller. When she joined us at Booka on Wednesday evening to discuss her latest novel After the End, she explained the connection between Frost’s poem and her writing.

After the End tells the story of Max and Pip, a devoted couple facing the sort of decision about their critically ill son’s care that every parent would dread. Like Thomas agonising over his paths, Max and Pip face choices, and the cruel possibility that they might make the wrong one. Uniquely in After the End, in a dark and adult echo of a ‘choose your own adventure’ story, Mackintosh gives the reader the opportunity to see both paths play out. In her story, it is possible to make that choice twice, or in the words of Frost: “know.. how way leads on to way.”

After the End is something of a departure for Mackintosh. Her debut novel I Let You Go was published to critical acclaim, winning Theakstons Old Peculier Crime Novel of the Year in 2016. This first novel, and the two subsequent publications, I See You and Let Me Lie, all became Sunday Times Bestsellers. Mackintosh worked as a police officer for twelve years, and received praise for the level of realism she was able to bring to the novels from these years of service. Mackintosh is also fluent in French, which was part of her degree, and she spent time living in France before joining the police. Now living in North Wales, she has also learned Welsh. Although aspects of her previous life experience have found their way into her novels, After the End explores a very difficult and personal chapter.

Many of the readers who begin After the End will know that it reflects very closely a decision that Mackintosh and her husband had to make about their own son. She has spoken openly about it on her website, on social media, and in the Q + A sessions she has done around the country, including at Booka. The book is not an autobiographical account, but the central question, and the reflection on the choice that they made, brings an acutely observed reality to the narrative. As she was in the final stages of drafting After the End, she actually gave out a hundred and nineteen proofs to her online book group, and really valued the feedback that she received from them, especially as this was such a departure for her.

As always, the questions and answer session on Wednesday was a highlight. Caroline Lang led the interview, drawing the audience through Mackintosh’s creative process and fascinating life. In a memorable moment, Lang related the biblical story about Solomon, the famously wise King of Israel, which seemed to echo aspects of the story. Two women came to the King, each claiming motherhood of a baby. Solomon questioned the women, but neither would relinquish their claim. Eventually, when no decision could be reached, Solomon took up a sword and explained he would cut the baby in two, giving half the baby to each woman. At this, the real mother wept and said that that the other woman could have the baby, if only he might not be harmed. She, as Solomon wisely judged, was the real mother, and she was awarded the child.

As Lang explained how After the End reminded her of this biblical story, there was a moment of quiet. Mackintosh was then quick to explain her hesitation. Solomon’s Baby had been a working title for the story, and this was something she had not made public. Other perceptive questions followed from the audience. One member asked how they might feel after finishing the story. Were they meant to feel uplifted? Depressed? Overwhelmed? Mackintosh credited this question as being an unusually perceptive one. As pleasant and patient as an author is, and however keen to promote their book, it must make a change to be asked a new question! And the answer? It depended on the reader, though she hoped that it would encourage us to reflect on the nature of choice.

We always like to ask the writers visiting Booka about the process of their craft. To non-writers and even aspiring writers, it is quite a mystery how other humans not so different from ourselves, get hundreds of thousands of words down on paper, in a format that will keep people gripped. Mackintosh left her full-time career to become a freelance writer and has obviously enjoyed success. But, as she explained, writing was also a very cathartic experience. This book is not the first time that she has written about events evoking the death of her own son. Her first novel I Let You Go featured a mother losing a child. She said that everyone should write, especially through difficult times. For her, it had been one of the things which helped.

During Independent Bookshop Week, we started to ask our visiting writers about their ‘Three to Read’ – three great books they would recommend. Mackintosh kindly directed us to three books that she had tweeted about recently. As you would expect, even her tweets were profound:

Lucy Booth, The Life of Death (2019). “Beautiful and thought-provoking”. This was written while the author was dying of cancer, and was published posthumously.

Kate Hamer, Crushed (2019) “Thoughtful and nuanced”. Set in Bath, three sixth form girls are tied together by complicated friendships and troubled relationships with their mothers.

Caroline Lang called Clare Mackintosh “an inspiring and resilient woman”, and this was clear for us all to see when she spent the evening at Booka. After the End is not an easy read, but a brilliant and beautiful insight into the psychology and consequence of human choice-making.