Beth Morrey – The Books that made me 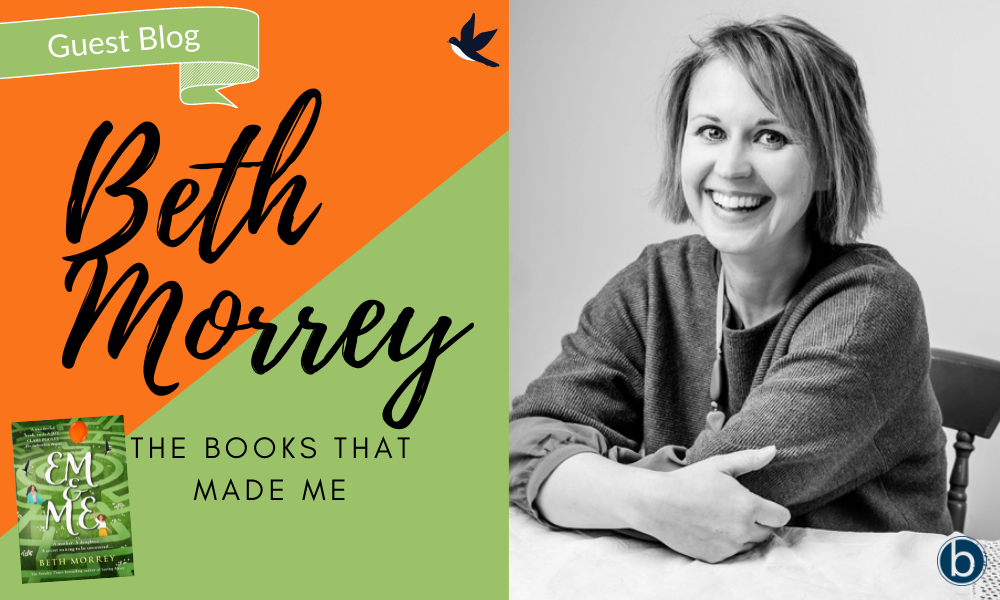 As promised, we are continuing our ‘Reading Journey’ series and our next instalment comes from the wonderful Beth Morrey. Continue reading to hear the books that made her and inspired her writing style used in Em & Me.

Have you read Fahrenheit 451, by Ray Bradbury? It’s a dystopian novel set in a society that has ceased to value books, where teams of firemen burst into people’s houses to burn their secret libraries. A group of exiled intellectuals rebel by memorising works of literature to preserve them. Each person ‘becomes’ a particular book, to save it for posterity. I have always been fascinated by the idea. Which book would I be? There are so many contenders…

As a person and as a writer, I’ve been shaped, influenced and enriched by the books I’ve read – it’s hard to narrow it down. But I’d probably start with Watership Down by Richard Adams – my Dad read it to me when I was little, and I remember being transfixed by minutiae; a buzzing bluebottle distracting Fiver the rabbit, the luscious depictions of nature. I decided that one day I would like to write a book with such tremendous tender detail. We also used to listen to Garrison Keillor’s Lake Wobegon Days in the car on long journeys. At that stage, I wasn’t quite a reader, but was learning to be a listener, to tune into the rhythm and flow of a story. I still think rhythm and timing are the most important qualities in a book – more powerful than prose or characterisation. There’s a bookish hot take for you…

I became a reader when I discovered The Famous Five. Enid Blyton was the author who unlocked my reading life, opened up that secret world that took me out of my own, on a marvellous flight of imagination. I became obsessed with finding secret passages, to the extent that during a visit to family friends, I prised up a flagstone in their cellar to see if there was a hidden room beneath. My parents, proud of their bookworm daughter, were not quite so impressed by this act of vandalism, even if it had literary motivations.

The earnest, slightly pious phase I went through aged about 12 can be entirely attributed to my passion for boarding school series, working my way through Malory Towers and The Chalet School. I wanted to be like Darrell Rivers and Joey Bettany – straight as a die, brave, with a tendency to exclaim ‘top-hole’. Thankfully I leapt straight from that to Jilly Cooper, and from then on, things got racier… If I was a Cooper novel, it would be Rivals, my favourite of the Rutshire Chronicles. They’re all so warm, funny and flippant, but Rivals is set in the world of TV, an industry I worked in for twenty years, and Rupert Campbell-Black is in his prime. My ideal husband (with apologies to my real-life one) would be a mix of Rupert and Gilbert Blythe, of Anne of Green Gables fame. That’s another, more wholesome, contender – is there a more uplifting, perfectly-realised character and setting than Anne Shirley and Prince Edward Island? I wanted to be Anne so much I dyed my hair red – which went about as well as when Anne dyes her own hair.

A keen historian, I went through a Regency romance phase, read everything by Georgette Heyer and gloried in spirited heroines, elopements and well-tied cravats. My go-to is Venetia, which is swooningly romantic and witty. I also loved Jean Plaidy, and in my later teenage years enjoyed reading fiction and non-fiction about formidable female figures like Elizabeth I, Catherine de Medici and Bess of Hardwick. Imagine them in a pub together, it would be awesome.

Talking of pubs, at university I read less (and drank more). We had to read, and our choices were largely dictated – it put me off a bit, being told to consume Primo Levi’s The Periodic Table and Italo Calvino’s If on a winter’s night a traveller… For the American Literature paper, I went off-piste and read Catch-22 on my own, without any input from a tutor. I adored the tragi-comic tone, added Yossarian to my list of literary suitors, and got my highest mark in all my exams. My reward for completing them was a hot bath and a brand new copy of Jilly Cooper’s Score!.

Like Anne Shirley, I knew I wanted to be a writer from an early age, but that ambition solidified just after university, when White Teeth was published. Zadie Smith was a few years above me at Cambridge and I remember being stupefied by the idea that someone so young could write such an immense novel. Furthermore, a uni friend of mine, Frog Stone, actually appears in the book as a minor character – to be so immortalised! I was in awe of the power of the author, who could create a world and a legacy in one, a little piece of history, lingering in libraries throughout the land.

Another writer who blew me away in my twenties was Zoe Heller. Notes on a Scandal was one of those books that scorched my soul, never to be forgotten. When I wrote my own debut, Saving Missy, the character of Missy Carmichael was partly based on Heller’s most famous creation, Barbara Covett. I found her voice so compelling and weirdly empathetic despite her being kind of creepy. I wanted to redeem her, give her a better life, and my starting principle was ‘what if Barbara was nice?’ So I gave Missy a dog instead of Sheba Hart.

One of the books that influenced my writing style was Nick Hornby’s About a Boy. I loved his deceptively straightforward storytelling, which seems simple but isn’t. The delicate humour, mix of light and shade and pin-sharp characterisation really spoke to me – when a book is done right, you feel the author is talking to you and you alone. For the same reason, The Girl with All the Gifts, by MR Carey, is one of my all-time favourites, because I’m convinced he wrote it just for me. I’m a sucker for a post-apocalyptic novel, but Carey’s great gift is that he makes the extraordinary seem authentic and believable. The world is absolutely crazy, but you totally buy it. A more recent read along those lines is Bethany Clift’s Last One at the Party. It’s dark and mad and hilarious, but somehow credible and real. That takes true skill.

But which, of those, would I choose if I was one of the Fahrenheit 451 rebels? As a citizen of a dystopian society, I’d go for something upbeat – probably Georgette Heyer’s Venetia, which I could recite by an open fire in the wilderness. Whatever world you’re living in, sometimes you just need a warm hug in book form.