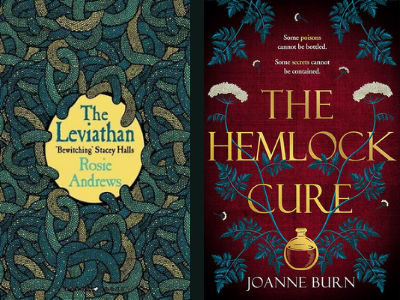 Join us for an evening ‘in conversation’ with Rosie Andrews and Joanne Burn as they come together to talk about their new historical novels The Leviathan and The Hemlock Cure, both set in the ‘extraordinary times’ of the mid 17th Century.

In an outstanding debut novel Rosie Andrews blends historical detail, myth, faith and the fantastic into a dark and compelling story.

Norfolk, 1643. With civil war tearing England apart, reluctant soldier Thomas Treadwater is summoned home by his sister, who accuses a new servant of improper conduct with their widowed father.

By the time Thomas returns home, his father is insensible, felled by a stroke, and their new servant is in prison, facing charges of witchcraft. Thomas prides himself on being a rational, modern man, but as he unravels the mystery of what has happened, he uncovers not a tale of superstition but something dark and ancient, linked to a shipwreck years before.

Something has awoken in England, and now it will not rest…

Based on the real history of an English village during the Great Plague, The Hemlock Cure is an utterly beguiling tale of fear and ambition, betrayal, self-sacrifice and the unbreakable bond between two women.

It is 1665 and the women of Eyam keep many secrets.

Isabel Frith, the village midwife, walks a dangerous line with her herbs and remedies. There are men in the village who speak of witchcraft, and Isabel has a past to hide. So she tells nobody her fears about Wulfric, the pious, reclusive apothecary.

Mae, Wulfric’s youngest daughter, dreads her father’s rage if he discovers what she keeps from him. Like her feelings for Rafe, Isabel’s ward, or that she studies from Wulfric’s forbidden books at night.

But others have secrets too. Secrets darker than any of them could have imagined.

When Mae makes a horrifying discovery, Isabel is the only person she can turn to. But helping Mae will place them both in unspeakable peril.

And meanwhile another danger is on its way from London. One that threatens to engulf them all . . .

We’re delighted to welcome Rosie Andrews and Joanne Burn to Booka for what should what should be a fascinating event – do join us!

Tickets: £8 (redeemable against signed copies of The Leviathan & The Hemlock Cure - £4 per book). Tickets available from the bookshop or purchase online (with booking fee).