Lindsay McCrae – My Penguin Year: Living with the Emperors 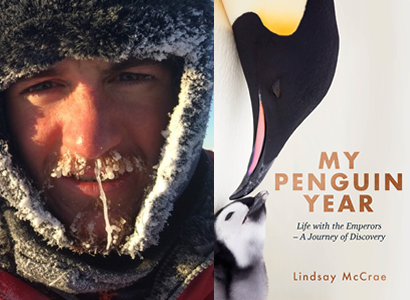 NB Change of Venue: This event is now being held at the Wynnstay Hotel, Church Street, Oswestry

Twelve men have walked on the moon. But how many have spent an entire season with the Emperor Penguins in Antarctica? Maybe more, likely less. Lindsay McCrae has – and this is his wonderful and frank story.

My Penguin Year recounts BAFTA award-winning cameraman Lindsay McCrae’s adventure to the end of the Earth, spending a year filming the most resilient creatures in nature. He had to overcome the inevitable sacrifices that came with living his childhood dream; facing down the personal obstacles of being over 15,000km away from the comforts of home almost proved too much. Out of that experience he has written an unprecedented portrait of Antarctica’s most extraordinary residents.

McCrae filmed the birds’ entire life cycle, endured freezing winds and missed the birth of his first son while living isolated on an Antarctic ice shelf. He also captured incredible footage for the hit BBC series Dynasties that was seen by 8 million British people.

Lindsay will bring the story of that dramatic year to life with an illustrated talk that is sure to delight and excite as we head deep south to the end of the earth and the world of these extraordinary birds. Don’t miss what should be a fascinating event.

Tickets: £5 (redeemable against a signed copy of My Penguin Year). Includes a glass of wine / soft drink on arrival. Tickets available from the bookshop, or purchase online (with booking fee).