An Evening with Michael Palin 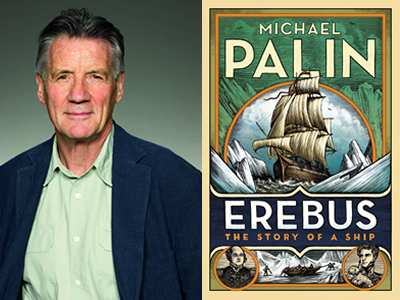 Booka Bookshop are thrilled to present an evening with Monty Python stalwart and much loved television globetrotter Michael Palin talking about his latest book Erebus: the Story of a Ship.

In this major new work, Michael Palin brings to life the world and voyages of HMS Erebus, from its construction in the naval dockyards of Pembroke, to the part it played in Ross’s Antarctic expedition of 1839–43, to its abandonment during Franklin’s ill-fated Arctic expedition, and to its final rediscovery on the seabed in Queen Maud Gulf in 2014. To help tell the story, Michael has travelled to various locations across the world – Tasmania, the Falklands, the Canadian Arctic – in search of local information, and to experience at first hand the terrain and the conditions that would have confronted Erebus and her crew.

Illustrated with maps, paintings and engravings, the book is a wonderfully evocative and epic account of a ship whose whereabouts had been a mystery for over a century and a half.

Don’t miss this chance to see and meet Michael Palin as the master explorer brings the story of this extraordinary ship back to life.

Tickets: £20 (Admits One - with signed book) or £30 (Admits Two - with one signed book). Tickets available from the bookshop or purchase online (with booking fee)