An Evening with Jamie Roberts 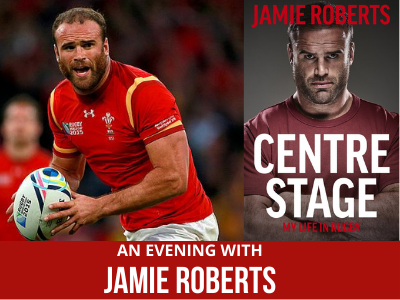 Join us for an evening with Welsh Rugby star Jamie Roberts as he talks about his life in Rugby and his new autobiography Centre Stage.

In a nation of rugby heroes, Jamie Roberts has become a legend.

Jamie Roberts is your quintessential hard man: a 6 foot 4, 17 stone slab of rippling muscle, conditioned to run hard into other huge men in an arena where physical dominance is the prime currency. Yet away from rugby, he’s a mild-mannered and thoughtful man – a qualified doctor with a thirst for knowledge and a curiosity about the world around him. It’s an intriguing contradiction.

In his first full season with the Cardiff Blues he was picked by new Wales coach Warren Gatland in the Grand Slam-winning side of 2008. He was still establishing his position in the national team when he toured with the 2009 Lions, emerging as Player of the Series. He went on to win 97 Test caps and play for clubs in Paris, London and Cape Town, yet his career has seldom been straightforward.

A fractured skull was one of many injuries he had to overcome, and from the start he had to juggle the competing demands of university life and professional rugby. The joy of Six Nations success with Wales was balanced by heartbreak in the World Cup and disappointment against southern-hemisphere teams, while major trophies at club level proved frustratingly elusive.

In this colourful and frank account of a sterling career, Jamie Roberts reveals all about life on tour, in boot camps and in dressing rooms filled with once-in-a-generation characters such as Mike Phillips, Andy Powell, Shaun Edwards, Martyn Williams, Brian O’Driscoll and Johnny Sexton. He also shares his views on concussion in rugby, the failings of the professional structure in Wales and the vital role of old-school team-bonding.

Don’t miss this fantastic opportunity to see a Welsh rugby great and hear his story!

Jamie Roberts will discuss his rugby career ‘live’ on stage with sports writer and TV presenter Ross Harries. This will be followed by an audience Q&A.

Tickets: £20 (Includes a signed copy of Centre Stage: My Life in Rugby).