An Evening with Eddie Jones 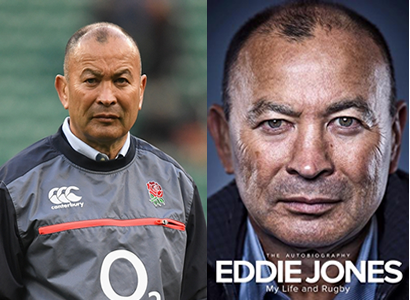 Fresh from this year’s Rugby World Cup, Booka Bookshop are thrilled to present an Evening with England coach Eddie Jones!

Brilliant, honest, combative – Eddie Jones is a gigantic yet enigmatic figure in world rugby and a true legend of the game. In My Life and Rugby he tells his story for the first time, including the full inside story of England’s 2019 World Cup campaign.

Eddie Jones is one of the most experienced and decorated coaches in world rugby. His career has spanned four World Cups; from losing to England in the 100th minute in 2003, working with South Africa when they won in 2007, and causing the greatest upset in 2015 when he masterminded the Japanese defeat of South Africa. Since taking over as head coach of England in 2015 Eddie Jones has masterminded a complete revival of the national team. He has won the Six Nations Championship back-to-back, including England’s first grand slam in a generation, their first ever whitewash of Australia, as well as taking them on their longest ever winning streak.

In his explosive autobiography Jones shows how his fiercely competitive attitude, his love of coaching and his philosophy of the game were formed while growing up in a tough working-class suburb of Sydney as a small half-Japanese kid, playing schoolboy rugby alongside the legendary Ella brothers. Learning from the extreme highs and lows of his own playing career – the numerous successes playing for Randwick and New South Wales but also the painful disappointment of never playing for Australia – he shows what it takes to be the best in the world and how everything he has learnt about the game on and off the pitch has gone into plotting England’s route to the top of World Rugby.

My Life and Rugby is the story of one of the most compelling and singular figures in rugby, told with unflinching honesty this is the ultimate rugby book for all fans of the sport. Don’t miss this fantastic opportunity to see Eddie Jones ‘live’ in Oswestry!

Tickets: £20 (Includes a signed copy of My Life and Rugby) Tickets available from the bookshop, or purchase online (with booking fee).