An Evening with Clare Mackintosh – The Last Party 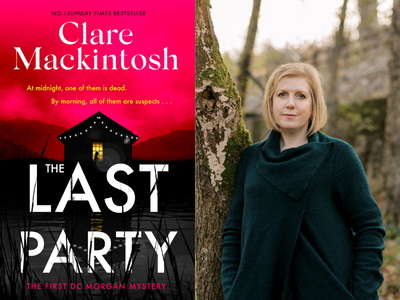 Join bestselling author Clare Mackintosh as she talks about her new novel The Last Party – the first in a stunning new crime series set on the Welsh/English border.

On New Year’s Eve, Rhys Lloyd has a house full of guests.

His lakeside holiday homes are a success, and he’s generously invited the village to drink champagne with their wealthy new neighbours. This will be the party to end all parties. But not everyone is there to celebrate. By midnight, Rhys will be floating dead in the freezing waters of the lake.

On New Year’s Day, DC Ffion Morgan has a village full of suspects.

The tiny community is her home, so the suspects are her neighbours, friends and family – and Ffion has her own secrets to protect. With a lie uncovered at every turn, soon the question isn’t who wanted Rhys dead… but who finally killed him.

In a village with this many secrets, a murder is just the beginning.

The Last Party is a mystery with echoes of Agatha Christie and Scandi-noir but with a modern edge all of Mackintosh’s own, and features her signature strong characters, heartfelt emotion and unpredictable twists and turns. It also draws upon her own experiences as a former police officer. We’re delighted to welcome Clare back to Oswestry to celebrate the launch of this major new crime series starring DC Ffion Morgan!

Clare Mackintosh is the multi-award-winning author of five Sunday Times bestselling novels, including I Let You Go, which was the fastest-selling debut thriller in the year it was released. Translated into forty languages, her books have sold more than two million copies worldwide, have been New York Times and international bestsellers and have spent a combined total of 64 weeks in the Sunday Times bestseller chart.