An Evening with Carl Fogarty 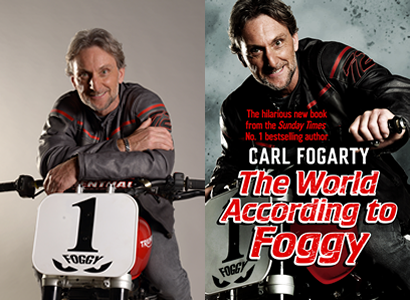 Join us for an evening in the company of seven times World champion and Superbike racing legend, Carl Fogarty MBE, as he talks ‘in conversation’ about his racing career, bikes and his new book The World According to Foggy.

Carl Fogarty is the most successful World Superbike racer of all time in terms of the number of championships and number of race wins. Retired from racing since 2000, Foggy is renowned for his gutsy, aggressive style and a fierce determination to win which netted him 59 victories and four World Superbike Championships (1994, 1995, 1998 and 1999). His new book The World According to Foggy is published to coincide with the thirtieth anniversary of the Superbike World Championship. Not just King of the Superbikes, Carl also won the fourteenth series of I’m a Celebrity…Get Me Out of Here! in 2014 and was crowned ‘King of the Jungle’

Foggy’s scintillating new book takes his fans into the memory banks of this most charismatic and straight-talking of sporting icons, transporting them into the weird and wonderful world of this endearingly quirky hero of the track. The World According to Foggy contains plenty of adrenaline-fuelled bikes and electrifying bike racing and thrills and spills galore, but it also reveals the man behind the helmet, his passions and frustrations, what makes him still leap out of bed in the morning and seize the day – ultimately, what makes this great man tick and explains his enduring popularity.

We are delighted to be hosting this event with a true bike racing great. Don’t miss this chance to meet the man himself!

Tickets: £20 (Includes a signed copy of The World According to Foggy). Tickets available from the bookshop, or purchase online (with booking fee).