The Crime Writers’ Association Bookshop of the Month 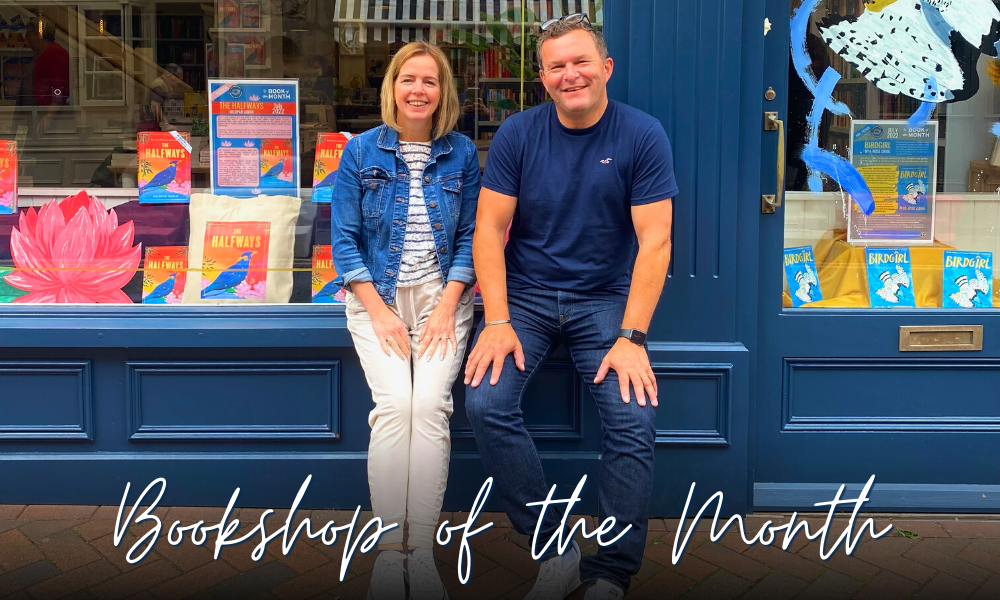 This month, The Crime Writers Association has named Booka their Bookshop of the Month! Bestselling Crime Author and CWA Board Member, Vaseem Khan interviewed Tim to find out all about Booka’s journey, read all about it below:
Behind Tim Morris’s shoulder is a framed photo of Shane Warne, the global cricketing icon who recently passed away. The photo is one of a gallery of celebrity faces on the wall of Oswestry’s iconic Booka Bookshop. Warne isn’t there because of Tim’s love of cricket – a passion he shares with me (though he now claims to have gone over to the golfing dark side due to ‘injury’) – but because Warne is one of the stellar guests Booka has hosted over the years in an events programme that has become the toast of the British indie bookshop scene.Carrie and Tim Morris are a wife and husband couple who decided to pack in successful careers – Carrie as an assistant head teacher in a primary school and Tim as a town planner – to establish a bookshop in Tim’s hometown of Oswestry on the Welsh border.The shop opened its doors in October 2009. Just six short years later, Booka was named Independent Bookshop of the Year 2015.Chatting to Tim over Zoom – Carrie was away leading an invasion of London – he tells me that it was a steep learning curve. He credits much of it to Carrie’s vision. ‘If we did have a Managing Director, then Carrie would be it,’ he says. ‘She’s the one with the big picture overview.’ He describes himself as Carrie’s ‘trusty lieutenant’, the sort of genial man-at-arms who, I suspect, in an earlier time, might have been sent over the top to face a hail of machine-gun fire or take a heavily fortified hill. Tim has always had a hands-on approach to the look and feel of the bookshop – he managed to rope in his dad to build the original shelving. (It’s not clear what rank his dad was given.)Tim and Carrie met at Sheffield University in their first year and have been together ever since – a romance for the ages, to hear Tim talk of it – though personally I suspect he might have been rebuffed at least half a dozen times before making it through the door. When I asked him about the changes he and Carrie have seen in the book industry over the years, Tim says: ‘The high street is evolving and we know that the online book marketplace is dominated by bigger players. But the pandemic gave people space to think about what was important to them and their communities. There’s been a renewed focus on supporting local businesses. We used to measure the success of the high street by how many chain stores there were – now it’s about how independent businesses can offer distinctive products.

Neil Gaiman famously said “a town without a bookshop cannot call itself a town!”’ Having said that, Tim also adds: ‘As indie booksellers we need to be willing and able to respond to these challenges. For instance, we’ve grown our online signed and special edition business, so much so, that we now have customers all over the world. We’re slowly conquering America – we’ve sent books to thirty-seven states!’

The shop’s events programme is one of the things they’re proudest of. Returning to Shane Warne, Tim describes how the international superstar turned up full of good cheer. Faced with signing 700 books, he said to them: ‘All I need is a big bowl of chips.’ Having been a speaker at Booka myself, I can thoroughly recommend the chip menu. (Or crisps, as we would properly call them in the UK.)

Actor and modern-day Phileas Fogg, Michael Palin, was another stellar guest. Afterwards, he told them: ‘I enjoyed the day so much I gave you the extended talk rather than the abbreviated version!’

I asked Tim what he enjoys most about bookselling. He tells me that he genuinely loves the interaction with long-term customers. ‘Some customers tell me their life story right away; others reveal themselves over multiple book purchases.’ He adds: ‘You know you’re truly valued when your community effectively takes ownership of your bookshop. In effect, it becomes their bookshop.’

With a national – and growing international reputation – it’s safe to say that Booka not only has a loyal local following, but one that now extends beyond the idyllic borders of Oswestry.