Picture Power: Talking About The Pictures 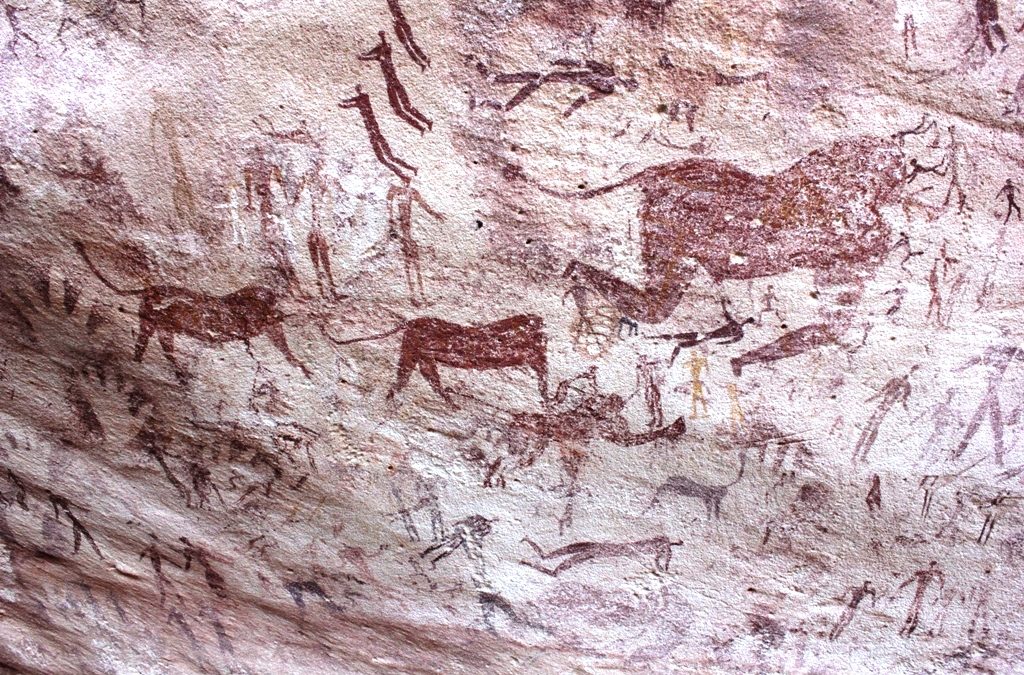 In November 2018, scientists working in pristine Borneo rainforest announced a thrilling discovery. Deep in an uncharted cave system, a crude, reddish outline of a cow-like animal had been drawn on the wall of the cave. Tests revealed it was 40,000 years old. Earlier artwork existed, but in the form of abstract shapes and crisscrossing lines. This was now officially the world’s earliest figurative artwork, where humans demonstrated the ability to draw objects from their own world and conceptualise their existence.

Humans were communicating through art long before writing developed. Abstract art exists from as early as 200,000 BCE, and figurative art thrives from 30,000 BCE onwards. Communities separated by thousands of miles of ocean show astonishing similarities in the development of artistic expression. In contrast, the earliest writing forms (for example Egyptians Hieroglyphics) did not develop until 4,000 BCE, and hardly surprisingly, used pictures and symbols for words.

So how is this relevant to books? It is clear that humans have been communicating meaning using pictures and images for roughly ten times longer than using written words. But there is more to it than that. Adult literacy rates in the UK in 1450 were less than 5%. The first great jump was in 1550-1650, from around 15% to 50%, due in part to the Renaissance. Literacy rates then stagnated for another two hundred years, but increased in the Victorian era (compulsory schooling was introduced in 1870) to about 75%. This is huge growth, but the sad reality today is, despite compulsory schooling and training up to the age of 18, an estimated five million adults in the UK are functionally illiterate, unable to read a label or fill out a form. Writing may have been around for thousands of years, but literacy is still catching up.

When you consider the hundreds of thousands of years that humankind has been communicating, the vast majority of that time, for the vast majority of those people, it has been pictures that have expressed their narratives and emotions. This explains the stained-glass windows in churches for the illiterate masses, and the symbols and images used widely in emergency information. A simple illustration of the sun would be recognised by almost everyone in the entire world. Yet alongside that, an image of the sun would also suggest many cultural ideas, such as daytime or holidays, which may be unique to that individual, or part of their communal identity.

Pictures books, opening up the beginnings of figurative and symbolic communication, have been a rite of passage for early readers since the 17th century. One of the earliest books specifically aimed at children was Orbis Pictus by John Amos Comenius (1658). It was initially published in Latin and German, but was quickly translated into other languages (alongside the original Latin) and became a staple textbook for early reading. There were 150 chapters and the topics covered included animals, religion, plants, and human activity, all beautifully illustrated with copperplate prints. Still, you would be a very lucky child if you managed to get your hands on one of these.

In contrast to the word heavy Orbis Pictus, children in the 21st century typically start reading picture books with few words, then more words, before moving to chapter books.  This has been the tried and tested method for many years. The benefit of having pictures in children’s books is obvious. The Centre for Literacy in Primary Education, who has conducted extensive research into improving children’s reading, launched “The Power of Pictures” project in 2013 which looks exclusively at the importance of images in books for children. Their findings are fascinating, and in some cases, quite surprising. Let’s explore some of the most interesting.

Firstly, there is a great variety of ways that text and words can work together to tell a story. For example, the words carry the main story and the pictures add detail and complexity. Or the pictures might carry the story and the writing is an accompaniment which offers some speech (though it might not be clear who is speaking, demanding interpretation). Or perhaps the words are only found in speech bubbles and the narrative is contained in the drawings. In some, the details in the pictures echo the text completely. In others the pictures elaborate the story, giving much more to talk about in spotting details. One thing was clear from their study: whatever form the picture took, the children were far more observant of the detail in pictures than adults.

Crucially, and essential for encouraging child readers, the pictures should be used to discuss the story further. Considering the different types of pictures books identified by “The Power of Pictures” research, the best sort of picture book combines the narrative and illustration, so you can’t understand one without the other. When being read with, adults will often help children understand the words, but they should also be ‘reading’ the pictures with them too.

What does ‘reading a picture’ mean? Their research suggests that most children will instinctively be able to ‘read’ a picture, that is to have a sense of the emotions, characters, mood, contrasts, danger, suspense and so on. However, they may lack the vocabulary or confidence to express their interpretations of the image. By asking exploring questions (how do you think this character is feeling? would you want to go into that wood? which fish do you like best and why?) the child’s vocabulary, processing skills, comprehension, ability to express opinions and analyse, empathy, perception and memory will all benefit. They will also probably enjoy the story more.

Picture books are not just a stepping stone to chapter books, but a crucial stage in the journey towards the comprehension of narrative and meaning. Our world is increasingly visual; video journalism competes against the long-form articles, social media battles for dwindling attention spans with clever pictures and anything can be photoshopped. It is incredibly important to teach our children the skills of interpreting images for meaning. They have the instinct and desire, but need the time, space and encouragement to develop this life-long skill.

Something very exciting is happening in our children’s section in Booka. Our grand unveiling will be happening soon. If you haven’t subscribed to our newsletter yet, you can find the link here to keep up to date with all our news and latest events.