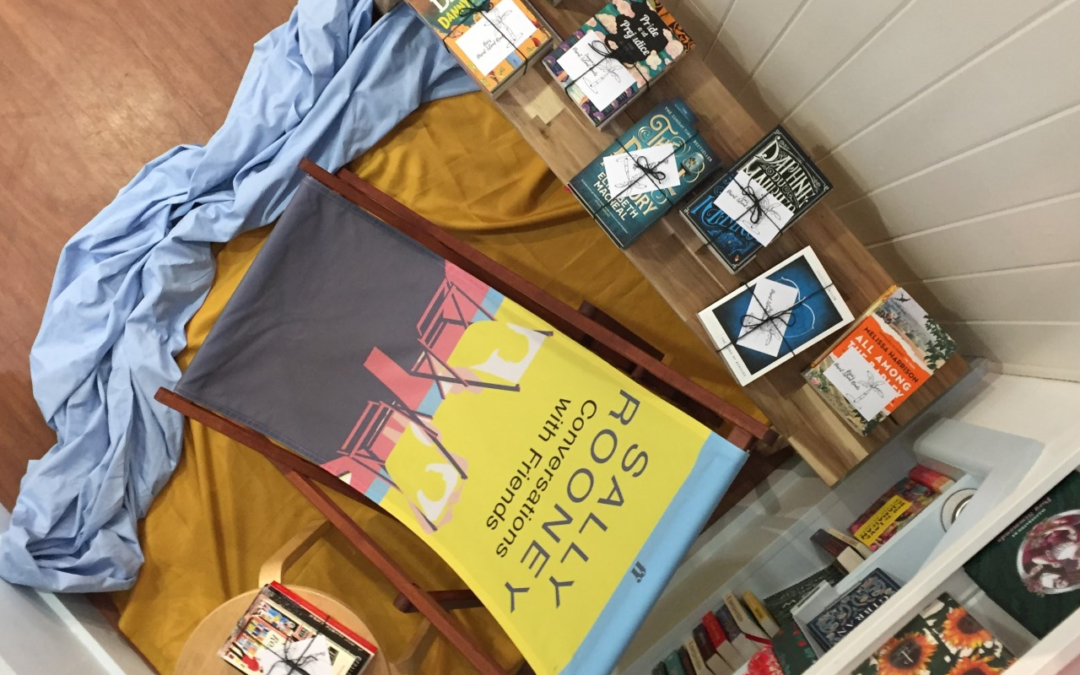 For some of us, the idea of a desert island may seem rather inviting in the current climate of pandemic. However, as isolation becomes the reality for all of us, loneliness could fast become a real concern. With that in mind, we are reaching out to you with more and more online content, including this blog post after a short hiatus. Without ever intending to make light of a very real and anxiety-inducing situation, we at the bookshop have been thinking about which three books we would each need with us should we indeed be stranded.

Fortunately for us, being limited to only three books will never become our reality (what with the piles of proofs we have stacking up and the tempting new titles we are introduced to on an almost daily basis). It needn’t become your reality either as we are still accessible via the online shop and by telephone, our booksellers will remain at your disposable for any book advice or recommendations across social media platforms for the foreseeable, and we will be continuing our doorstep delivery service within a ten-mile radius of the bookshop (with postage further afield at a small fee) for as long as this is physically possible for us to do so.

I tend to think that people’s reading tastes, habits and their respective choice of books when restricted to but three say a lot about them. Our new “Current Reads” shelf in the shop is often testament to how disparately we read at Booka and is something we not only find interesting on a personal level but also essential when bookselling as a team.

‘Multi-layered, cleverly constructed, atmospheric and passionate. A reminder of the beauty and coastal landscape of Lyme Regis – reach it from your armchair!’

Where The World Ends by Geraldine McCaughrean

‘A darkly visceral historical adventure based on a true story. Brutal and heroic’

‘A charming and comforting reminder of how books connect each other across continents, cultures and cities’

‘Rich, measured, rhythmic prose and vivid physical imagery. Harvest is a stunning depiction of rural country life and all its hardships at the time of the enclosures’

‘A brilliant mix of fable, folklore and community, fusing modern day life with myth and legend. A novel with style and substance that will stay with you long after you’ve turned the final page’

‘Part mystery, part WWI war story, part romance, as a young inexperienced medical student leaves his comfortable life in Vienna for the horrors and casualties of a frozen Eastern Front. A powerful and immersive read!’

The Doll Factory by Elizabeth Macneal

‘Richly evocative and immersive historical fiction set in Victorian London. The gripping tale of a young woman desperate for a sense of freedom and self-expression in a suppressive society. At times, dark and twisted. Expect strange and beautiful art, ambition, romance and obsession’

‘Charming, eccentric and witty. Through beautiful and poignant prose, we follow orphaned girl with “hair the colour of lightning” taking to the rooftops of Paris in search for her lost family. Along the way, she learns the importance of friendship, a good feast and never ignoring the possible!’

‘Heartening, reassuring escapism; enduring and delightful. The Secret Garden is for young and old alike, depicting nature’s simple beauty, mystery, truth, kindness and compassion through the eyes of a determined and headstrong little girl’

‘From illicit pre war love affair to the trenches of Northern France in 1916, Birdsong tells the story of Stephen Wraysford a young Infantry Officer. Faulks wrote this book at a time when he felt that WW1 was slipping from our collective consciousness. Read it and it never will. His electrifying account of the night before the start of The Somme offensive is some of the most memorable narration I’ve ever read’

Danny, Champion of the World by Roald Dahl

‘The ultimate father and son adventure story, Roald Dahl at his brilliant best. My favourite book as a child and still a favourite now’

‘The map of a dead pirate, a band of intrepid adventurers and a ruthless gang of buccaneers. Treasure Island tells the tale of the hunt to find Captain Flints buried treasure. A classic adventure story for all ages, nothing else needed for your desert island read’

‘Much of this book reads like poetry. Bitter goddesses and narcissistic heroes come alive in this lyrical and raw reimagining of myth. This brutal, gorgeous female voice feels like she is calling through time for her story to be heard’

‘Austen has a dry, witty humour that is such a pleasure to read and come back to over and over again in this classic romance, which has become the blueprint for so many modern rom-coms. The characters are like fond old friends that you poke fun at’

‘This book is literally life saving, like a lifeboat in choppy waters, a beacon of hope in the darkest times’

‘The pleasure of re-reading the book you loved as a child is like the hug of a comfort blanket. Full of magic, adventure and friendship’

Song of Achilles by Madeline Miller

‘This is one of those books that gets better each time you read it. Beautiful, brutal, raw, mythical, extraordinary and heartbreaking. My favourite re-telling with a twist’

A collection of poetry, which serves as a haunting and visceral insight into a great mind’

‘A coming-of-age story set in the summer of 1950. Teeters on the edge of taboo throughout. Brutal but tender. Dangerous but sublime. Uncomfortable yet immersive’

Everything I Know About Love by Dolly Alderton

‘Dolly Alderton at her very best. On love, relationships and just growing up. Witty, insightful, hilarious and heartbreaking. To be read like a series of texts from your wisest friend. A girl-guiding handbook for how/how not to navigate your 20s. A must read for every young woman or anybody seeking to understand one. Can’t wait for her first novel coming out later this year!’

All Among the Barley by Melissa Harrison

‘Vividly evocative of time and place; an atmospheric coming-of-age, portrait of a family and a country on the brink of great change’

Beneath the Bonfire by Nickolas Butler

‘A visceral and surprising collection beautifully evoking the landscape and people of contemporary rural America; it shines a light on the inner workings of outwardly stoic souls’

Record of a Spaceborn Few by Becky Chambers

‘Quietly beautiful and profound speculative fiction about humanity living out among the stars, what it means to be human, to live in community and embrace our heritage. Full of warmth and wisdom, a wonderful novel’

‘A time travel love story – the romantic, poignant, funny and mind twisting tale of art student Clare and the love of her life, Henry, a man spontaneously and periodically pulled out of time to revisit moments of gravity and emotion from his past and future’

Priory of the Orange Tree by Samantha Shannon

Hare with The Amber Eyes by Edmund De Waal

‘I loved this for its ability to transport me both around the World and through time, whilst at the same time unpicking the amazing details of an extraordinary family’s history; an emotional journey perceptively and sensitively conveyed by Edmund de Waal. It provided fascination for me on each of these levels, though undoubtedly its main joy came through the wonder of the objects themselves- the netsuke. Tiny, intricate objects, for me they reflect the wonderful, universal ability of human beings to create, collect, display, desire and value, objects of beauty. From my desert island I could remember objects that I had owned, some chosen by me, others given to me, those I had -like de Waal- inherited, and perhaps also be inspired to create something tiny, beautiful and comforting to hold’

Testament of Youth by Vera Brittain

‘This book is a brilliant, moving account of those terrible, agonising years of the First World War, written by one of the most impressive and inspiring women of the 20th century. A definite desert island book for me, not least for its social and political commentary of the times, its pacifist and feminist threads. But perhaps its greatest contribution was that it showed the power of internal strength that can be sought by individuals- and hopefully found- when external events beyond control turn the world upside-down, destroy lives as they have been known, even tear people that are loved away. Emergence from disaster is an invaluable beacon to be guided by, especially at the present time’

The Life Of Rebecca Jones by Angharad Price

‘Though the shortest, this is my top choice, for its beautiful, poetic prose, and for the meditative and contemplative influence it had upon me when I first read it. From my desert island I would be able to recall the undoubted beauty of the Maesglasau valley, reflect on the immense changes in the way of life those who have farmed there have seen and endured, and wonder at the marvel of Angharad Price’s skill at conveying emotion so brilliantly through the written word. Perfect. . .’

NB This blog post was written before 23rd March when we were forced to temporarily close the bookshop and furlough our bookselling team.