Margaret Atwood’s The Testaments: What We Know So Far

Posted on 7th September 2019 by Rebecca 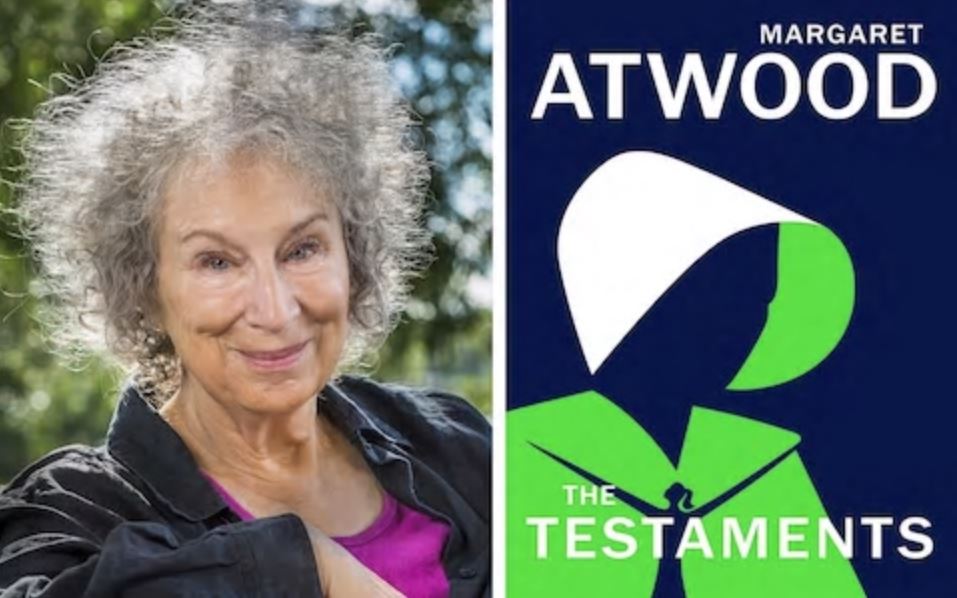 There are some mild spoilers for The Handmaid’s Tale in this post. You have been warned!

Do the ideas in dystopian novels ever become reality? It certainly seems so. When The Handmaid’s Tale was published in 1985 it seemed to hark back to 19th-century style female oppression benefiting from 20th-century technology (tasers and CCTV). But as time has passed, and more and more attention has been focused on the inequalities still in place in the UK and US, before even considering those existing elsewhere, The Handmaid’s Tale seemed less like an alternative history, and far more like an inciteful premonition. In this Bookablog, we explore some of the burning questions about the long-awaited sequel The Testaments as we get ready for the release on the 10th of September.

Do I need to have read The Handmaid’s Tale?

Yes. I mean, you might be able to get away with reading a very detailed summary, but why wouldn’t you? Quite apart from the fact that The Handmaid’s Tale is brilliant, you would be missing out on much of the depth and back story that makes the novel such a delight. In a way, the main story of The Handmaid’s Tale is quite simple, and you might be able to quickly recap the central plot, but for the full horror of Gilead, you need to read it. Atwood’s prose is also remarkable: edgy, restrained and utterly relatable. There is a reason why it sold 8 million copies in English (and many more in translations).

I’ve watched the recent TV series. Is it close to the book? Would watching that replace reading the book?

What do you expect us to say! In fairness, Atwood worked really closely with the writers for the 2017- 2019 series and therefore the essence is very true to the novel, if not the exact plot. The Handmaid’s Tale is first person, following Offred, a handmaid to one of the commanders in the new state of Gilead. Fertility has dropped to an all-time low, and fertile women are offered as ‘handmaidens’ to barren wives desperate for a child. The novel contains flashbacks to the narrator’s time before Gilead. But (and here the TV version and book differ) the book’s flashbacks only show scenes which feature Offred. The TV version follows other characters (for example Offred’s husband, daughter and best friend) as they experience their own events. In the novel, Offred can only guess what has happened to her daughter.

In all honesty, the first season of the TV show follows the plot of The Handmaid’s Tale very closely. The second and third season are beyond the point of the end of the novel. It is still not clear whether aspects of the second and third series will overlap with events in The Testaments. What is a fact is that the first season of The Handmaid’s Tale runs to about 10 hours of viewing. You could probably read the book quicker.

Is it suitable for my teenager?

The Handmaid’s Tale has been on the A Level English Literature text list for years, meaning 16-year olds have been drawing out its themes and context for some time. Teenagers are surprisingly resilient, and sadly, the news they hear every day is not much worse. The Handmaid’s Tale contains sex, consensual and non-consensual, racism, violence and bleakness which might be very challenging to a teenager already feeling a lack of optimism about the future. As always, talking about books and putting them in context will help to make it an important and inspirational read. If they are not quite ready for full-on Atwood, there are some excellent YA books that might bridge the gap. Only Ever Yours (2014) by Louise O’Neill portrays a world post ecological apocalypse where girls attend a school whose sole purpose is to prepare them for men. The Power (2017) by Naomi Alderman depicts a world that seems normal, but where teenage girls have immense physical power to cause pain and even death, changing everything. Finally, The Carhullan Army (2007) by Sarah Hall paints a Britain in thrall to the US and under a dictatorship where women are forcibly fitted with contraceptive devices, and rumours abound of a group of ‘unofficial’ women living outside the law in Cumbria. These are great reads in their own right.

Is it true that Amazon sent out copies early to customers in the US?

Yes, it is. Until earlier this week, the manuscript had been on lockdown, with very few advanced copies available. Anyone who had an advanced copy, for example the judges for the Booker Prize, would have to sign papers promising not to leak spoilers. It has become common practice for highly anticipated releases to have very specific release dates. This concentrates the sales in one trading week and means that the novel is more likely to debut as a ‘bestseller’. But on the 3rd of September, 800 US Amazon customers received pre-orders of The Testaments almost a week before the official release date of the 10th of September. Such a comparatively small leak is unlikely to affect Atwood’s bestseller status, but that is hardly the point. This ‘accidental’ act on Amazon’s part highlights the discrepancies that exist between the online giant and independent bookshops. Amazon has ‘apologised’ and that seems to be that. Serious consequences would await a smaller company making the same mistake. To further compound the error, online writers have speculated that it was no accident, rather a deliberate act on Amazon’s part to advertise its Prime service. Order with us, they imply, and you might accidentally get your book early. Advertising is such a tricky business these days, isn’t it?

So, should I just not go online then if I don’t want spoilers?

You should be fine. There are spoilery reviews out there now, but writers are pretty good at marking their reviews as containing spoilers. We are pretty close to the release date now, so you could just hang in there and read it yourself. Reading a review is always a dicey business. It makes sense perhaps if you’re not sure whether to read something. But if you’re definitely going to read the book, it might be better to come to it fresh, form your own opinions and agree or disagree with the reviews afterwards. Single-word accolades are often enough with something this big. Finding out that it is ‘a blockbuster’ according to the Telegraph, or ‘propulsive’ according to the New York Times is all you need to know.

I like to know the basic plot though. What do we know about that?

The Guardian released an extract earlier this month which is well worth a read while you are waiting. We learn that there are three female narrative voices and the narrative is set 15 years after the events concerning Offred. One of the female voices is Aunt Lydia, familiar from The Handmaid’s Tale. Lydia, a domineering figure from the first novel, responsible for ‘preparing’ the handmaids for their new role, is reflecting on her life and role in Gilead. The other two seem to be new characters: Agnes, who grew up in the regime in Gilead, and Daisy, who like Atwood, grew up in Canada. We also learn about the Underground Road, a liberation route to get women and girls out of Gilead, a regime weakening war with Texas, and the role of the Pearl Girls, missionaries for the regime on the hunt for fresh wombs. It is, according to the Guardian, a more hopeful novel than the first, ‘a rallying cry for activism that argues for the connectedness of societies and their peoples’.

When can I get my copy from you?

Unlike Amazon, we will be selling copies from Tuesday the 10th of September. Come and see our amazing new Testaments window art by the talented Louisa in our Booka shop as you pick up your new copy with a free Tote Bag (while stocks last). We will also be having some tasty Testament themed cupcakes on the day to keep your energy up for all the reading. If you want to make an evening of it, then at 7.30 PM on Tuesday we will be joining other Atwood fans locally and across the nation at Kinokulture, Oswestry’s community Cinema, for their Margaret Atwood live broadcast. This will feature an extensive interview with Margaret Atwood by broadcaster and author Samira Ahmed. There will be extracts from her new book performed live by special guests. You will then be able to buy your brand-new book from our Booka stand, which will be in residence on the night.

The Testaments has been Shortlisted for the Booker Prize, with the winner announced on the 14th of October. Whatever the outcome, the conversation surrounding The Testaments is sure to be explosive. People who don’t read the books, don’t get to have opinions. Be part of the conversation and pick up your copy from us soon!