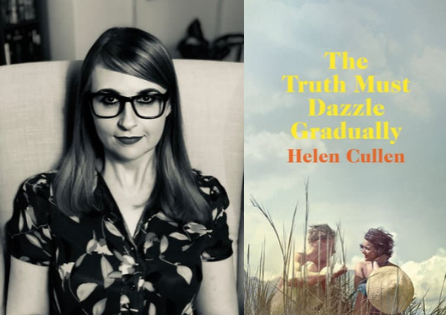 In our efforts to bring you more and more online content, which is accessible to you all at home, we have been upping the ante across our social media platforms. First of all, we created the Friends of Booka Facebook group, a space to share book-ish anecdotes, recently read reviews and join in with our booksellers’ series of challenges (book face, spine poetry etc.). In conjunction with three other independent bookshops (as “the 4 Indies”), we have recently launched an initiative called At Home With . . . to bring you live author events throughout this period of lockdown. After somewhat of a hiatus, we have also been back on the blog; recently having shared two in-house blog posts that we’d had lined up prior to lockdown. Since then, we have reached out to some great writers and in turn, we have some guest blog posts now in the pipeline. The first of which comes to you from Helen Cullen.

Helen is an Irish writer living in London. She is author of The Lost Letters of William Woolf; a novel published in 2018, which has since been optioned for television adaptation. Helen was also shortlisted for Best Newcomer at this year’s Irish Book Awards. Her second novel, The Truth Must Dazzle Gradually, will be published this August. Set on the west coast of Ireland, a family shattered by tragedy, ‘The Truth Must Dazzle Gradually is a celebration of the complex, flawed and stubbornly optimistic human heart’.

So, without further ado, let’s delve into Helen’s recommendations. . .

As one of the writing class of 2020, my second novel, The Truth Must Dazzle Gradually, will be published soon by Penguin. From modernist masterpieces to global literary phenomenon’s Ireland’s reputation as the birthplace for some of the most respected and beloved writers worldwide is cemented. Today, the literary landscape is as rich as it has ever been with many women writers in particular emerging with powerful voices that are winning not just awards, but hearts and minds, far and wide. I am proud to be published alongside some incredible Irish writers who also release books this year and I have chosen just 10 of those brilliant reads to highlight here for you.

1. The Weight of Love by Hilary Fannin
In a dual narrative split between London, 1995 and Dublin, 2018, Robin and Ruth are two-thirds of a love triangle – the shaky foundations on which a marriage is built, and friendships are tested. An intimate account of nostalgia, marriage and love in all its forms, Fannin has tackled a universal tale of heartbreak and made it feel entirely unique. Adored by critics, it is set to be remembered as one of the books of the year.

3. Actress by Anne Enright
The latest novel from one of my most beloved authors, Actress is one of Enright’s finest. It tackles fame and sexual power with wit, precision and profundity as a daughter struggles to uncover the hidden truths of her mother, the Irish theatre legend Katherine O’Dell. If you haven’t yet discovered the genius of this Booker-winning living legend, I cannot recommend working through her back catalogue enough.

4. The Butchers by Ruth Gilligan
Gilligan’s fifth novel is a folkloric feminist tale that illuminates the BSE crisis in the rural borderlands of Ireland in 1996. Genre-defying, mysterious, thought-provoking and a strangely timely read for the current climate.

5. Big Girl, Small Town by Michelle Gallen
Described as a cross between Derry Girls and Milkman, Gallen’s debut novel is a moving, yet hilarious account of a very particular young woman, Majella, who is working in a chip shop in Northern Ireland in the wake of the Troubles.

6. A Quiet Tide by Marianne Lee
Lee’s debut novel is a work of historical fiction that resurrects a forgotten Irish woman from history – Ireland’ s first female botanist, Ellen Hutchins. At the time of her death in 1815, twenty-nine-year-old Ellen Hutchins had catalogued over a thousand species of seaweed and plants from her native Bantry Bay and was a major contributor to nineteenth-century scientific discovery but has all but been forgotten – until now.

7. The Wild Laughter by Caoilinn Hughes
Already recognised as a powerful new voice in Irish literature following her short-story writing and a critically acclaimed debut, Orchid & the Wasp, Hughes cements her reputation further with her second novel. The Wild Laughter offers an audacious insight into post-Celtic tiger Ireland through the exploits of two brothers who have nothing left to lose.

8. As You Were by Elaine Feeney
Beloved poet turned novel writer, Feeney is set to be the Irish publishing sensation of the autumn with her debut. Heart-breaking but darkly funny, this novel set in a hospital introduces the unforgettable character of Sinéad – a tough, complicated woman who has hidden her diagnosis from everyone and only confides in a magpie. This book is a tour-de-force delivering a hug and a slap simultaneously and a poignant account of sickness for our time.

9. Strange Flowers by Donal Ryan
The publication of a new Donal Ryan novel is always an event in the Irish literary calendar. Coming in August, Strange Flowers, brings us back to 1973 where twenty-year-old Moll disappears leaving her parents distraught. When she returns five years later, what – and who – she brings with her alters the course of her family’s life forever.

10. A Ghost in the Throat by Doireann Ní Ghríofa
In a stunningly unique prose debut, poet Ní Ghríofa fuses essay and autofiction to explore the inner life and the deep connection felt between two writers centuries apart. In the 1700s, an Irish noblewoman, Eibhlín Dubh Ní Chonaill, on discovering her husband has been murdered, drinks handfuls of his blood and composes an extraordinary poem, Caoineadh Airt Uí Laoghaire. In the present day, a young mother becomes obsessed with its parallels with her own life and sets out to track down the rest of the story.

All of these novels are available to order from Booka Bookshop or your local indie bookstore. Please do read and let us know what you think and who your favourite Irish authors are. You can find me on Twitter as @wordsofhelen. Enjoy!

Thanks for that Helen! Our “To Be Read” pile is getting taller and taller by the minute.

We hope you enjoyed the first instalment of our guest posts here on the Booka blog and that our other forms of social content are providing you with some much-needed light-hearted entertainment, too.

Stay safe and keep reading everybody!